I had an interesting phone conversation this past week. A week prior, a man (let’s call him Adam) had called and left the message that he was “desperate for a landscape design.” I was on vacation at the time, but returned his call when I got back to town. By then, Adam was no longer “desperate” but extremely frustrated. We spoke on the phone for some time and he told me he had needed a rush job because the landscape installer was due to show up in two days. (My schedule wouldn’t have afforded him the rush job even if I had been home, but that’s not the point.) Adam had found someone willing to draw up a quick design but now he was unhappy with the result.

This is a summary of his complaints. The designer told him his plan was too choppy with too many geometric shapes and that it would be more natural with long, flowing, curvilinear lines. This felt too confusing to him – the curves came out and back for no reason. The sketch wasn’t made to scale, so the firepit didn’t fit and the lawn space was smaller than he envisioned. The slope of the land wasn’t accounted for in the drawing and the first thing the landscape installer said was “that won’t work.” Adam spent a good sum of money on the design and was still left with multiple points to figure out on his own and was really unsure of the direction of the installation and the intended end result.
I’d like to say at this point that I’m not perfect, I’ve made mistakes on designs, and that building out a design drawn on flat piece of paper is an art in and of itself. I’m not looking to bash another designer, especially since it was a rush job. Rather, my point of sharing this story is to emphasize the importance of planning ahead. A good landscape design requires careful consideration of many factors including: 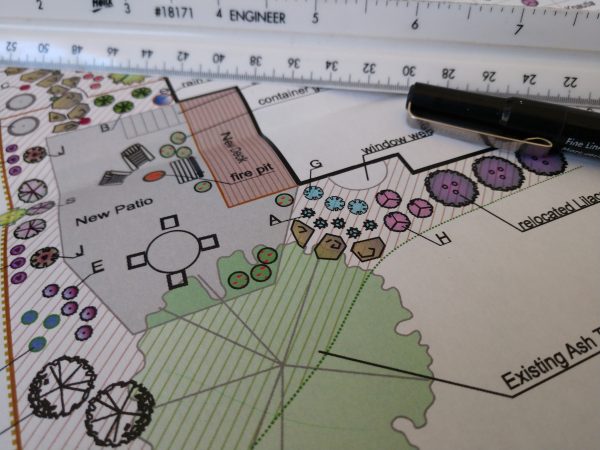 At the end of our conversation I advised Adam, “Beauty is always in the eye of the beholder.” I’m not sure that really assuaged his fears, but it was the best I could do at that moment.

If you are considering fixing up your landscape (or know someone who is moving to a new home or otherwise wants to fix up their yard), now is a great time to get started on the landscape design. Besides not feeling rushed to get something together in two days, remember that here in northern Colorado, plenty of landscape work can be done over the winter and you’ll be ready to place the plants in the spring. Give me a call (970-988-3808) for a free consultation!