What’s in a Name: Dianthus

Continuing this year’s theme of how various flowers got their names, this month I’ll be sharing information about Dianthus.

There are over 300 species of annuals, biennials and perennials of Dianthus. The common names for Dianthus include Pinks, (also Hardy Pinks, Maiden Pink, Grass Pink, Chinese Pink and Clove Pink) Carnation and Sweet William.

The name Dianthus was recorded by the Greek botanist Theophrastus a Greek Botanist/Scientist/Philosopher and successor to Aristotle who lived from 371-286 BC. The name comes from two Greek Words – “dios,” referring to the Greek god Zeus, and “anthos,” meaning flower. Dianthus are thus “The Flowers of God.”

The blooms of Dianthus are all shades of pink, white, maroon and bright red. Many are bi-colored or have a darker eye. The common name “Pinks” (and its many variations) does not come from the color, however, but from the ragged, serrated edge of the petals which look like they were trimmed with a seamstress’s pinking shears. Dianthus chinensis is the mound-forming plant most commonly grown in containers and flower beds.

Dianthus caryophyllus is the botanic name for the florists’ Carnation. There are differing opinions about the name “carnation.” Some scholars think it comes from “coronation” or “corone” (flower garlands), as it was one of the flowers used in Greek ceremonial crowns. Others think the name stems from the Latin “caro” (flesh), which refers to the original color of the flower, or “incarnatio” (incarnation), which refers to the incarnation of God made flesh. Carnations germinate easily, cross-pollinate and hybridize without difficulty and make great, long-lasting cut flowers. They have been in cultivation for well over 2000 years.

The common name Sweet William refers to Dianthus barbatus which grows as an annual or a biennial (meaning it grows for one year, flowers the second year, then dies). The flowers of Sweet William look very much like Dianthus chinensis but grow in clusters on stems which are 8-12″ tall.  One legend regarding how Sweet William got its English common name is that it was named to honor the 18th century Prince William, Duke of Cumberland after his victory against Scotland. It is also claimed that the Scots call the flower “Stinking Billy.” Though this makes a good story, it is entirely untrue. The English botanist John Gerard referred to Dianthus barbatus as “Sweete Williams” in his garden catalogue of 1596, 150 years before Culloden. It is also said that the flower was named after William Shakespeare or Saint William of York or perhaps after William the Conqueror. Actually, no one is sure who William was or why a non-fragrant flower was named “sweet” – something to ponder!

Caring for your Dianthus

Beginning in the late 1800’s, Carnations were an enormous cash crop here in Colorado. By 1940, the popularity of the flowers established Denver as the “Carnation Capital of the World.”  This distinction and the profitability of growing Carnations in Colorado lasted for about 40 years.

Today, 98% of Carnations produced for the cut-flower industry come from Columbia and Ecuador. 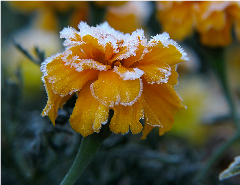