What’s in a Name: Impatiens

Returning to this year’s theme of how various flowers got their names, this month I’ll be sharing information about Impatiens.

The word “impatiens” is Latin and, somewhat obviously, it means “impatient.” These plants were named for their explosive seed-pods which propel seeds in every direction when ripe. The seed pods look very much like flower buds although they turn slightly brown when ripe (circled in the picture). When touched they will explode – a curiosity and amusement to both children and adults!

There are over 850 known species of Impatiens. They are native and grow as perennials in mountainous areas of Asia and Africa.

The most common annual Impatiens in our area are Impatiens walleriana which was named in honor of Rev. Horace Waller, who was a missionary in central Africa in the 1800’s.

New Guinea Impatiens (Impatiens hawkerii) are indeed native to New Guinea. This species often have darker colored leaves and bigger flowers – 2 to 2.5” diameter. They were collected by the USDA in the early 1970’s. Only 25 plants were collected from New Guinea and from those 25 plants we now have a multitude of colors and plants available at the garden centers.

Other common names for Impatiens are Busy Lizzy (for the abundance of flowers), Touch-me-not (for the exploding seedpods) and Patient Lucy (perhaps for their shade tolerance).

Whatever you want to call them, Impatiens are well loved garden and container plants for their ever-blooming, cheerful habit.

Caring for your Impatiens 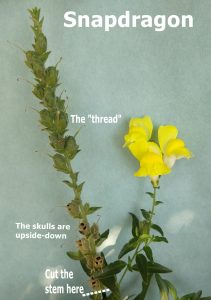 Deadheading and Cutting Back 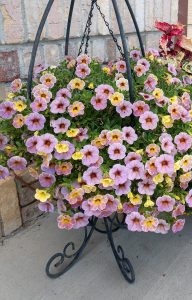