What’s in a Name: Marigold

In late summer, Marigolds are flourishing in the intense sun and heat. Their bright orange and yellow flowers seem to resemble the sun they love. Some types of Marigolds will open and close their flowers with the sun and many will turn their blooms to follow the sun as it progresses across the sky each day.

When you call a flower a “Marigold,” you may be referring to any of several different flowers. Calendula officinalis are also called Pot Marigolds; Tagetes erectah are known as African Marigolds; and Tagetes patula are called French Marigolds. Each name has an interesting story behind it.

“Marigold” was named in the church for “Mary’s Gold” named in honor of the Virgin Mary. Since Marigolds are good cut flowers, they were frequently used to adorn church altars. Marigolds were especially popular for funerals as their strong fragrance (or odor by some people’s opinion) would help cover the stench of the deceased.

Pot Marigolds (Calendula spp.) are called by that name not because they grow well in containers (which they do) but because they were often used as a cheap substitute for saffron to color cakes, butter and puddings. These flowers are edible and have a bitter, spicy flavor. Calendula was also used to color women’s hair blonde!

African Marigolds are not native to Africa and French Marigolds are not from France. Both of these Tagetes species are native to the region extending from New Mexico south through Central and South America. They were introduced to gardeners in Europe in the early 1800 and quickly became a popular cultivated flower because the seeds sprout so easily. When Tagetes flowers are fed to chickens, they produce eggs with a dark orange yoke!

Carl Linnaeus, a Swedish scientist who laid the foundations for our modern scheme of binomial nomenclature in the 18th century, is credited for naming Marigolds “Tagetes.” He named the flower in honor of Tages, the grandson of Jupiter in Roman mythology. Tages was a god of the underworld who specialized in haruspicy which is the useful art of foretelling the future by examining entrails. (Who knows, maybe it’s just as useful as weather forecasts or stock market predictions!) Perhaps Linnaeus thought this was a brilliant idea as he named a very brilliant flower in Tages’ honor.

By whichever name you call them, the bright cheery flowers of Marigolds are sure to brighten your landscape in late summer!

Plants that are called Marigolds: 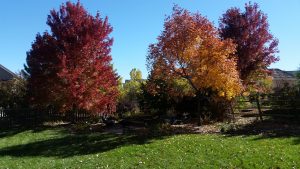 How Do Trees Know It’s Autumn?