What’s in a Name: Daffodils

The flowers and plants we enjoy in our containers and flowers beds often have interesting stories of their discovery and their names. Have you ever wondered where the plants came from and how they got their names? This year, I will relate to you the heritage of several of our most familiar flowers.

This month we notice the early spring blooming daffodils. Depending on  which botanist you talk to, there are between 40 and 200 different daffodil species, subspecies or varieties of species and over 25,000 registered cultivars (named hybrids) divided among the thirteen divisions of the official classification system. Daffodils are thought to be native to the entire Northern Hemisphere, although there is a great concentration of wild daffodils around the Mediterranean, particularly Spain and Portugal.

The name “Daffodil” traces back to ancient Greece. One possibility is that the name Daffodil is derived from an earlier “Affodell”, a variant of Asphodel. You may remember from the mythology unit of your literature class, the Asphodel Fields is a section of the Ancient Greek underworld where indifferent and ordinary souls were sent to live after death. Perhaps the Fields of Asphodel are filled with daffodils, although there is another Asphodel Flower which looks nothing like the daffodil.

Botanically, Daffodils are Narcissus. All Daffodils are Narcissus, but Narcissus plants are also jonquils and paper-whites. Narcissus is also a character from Greek mythology who, in at least one of many variations of the tale, became so obsessed with his own reflection as he kneeled and gazed into a pool of water that he fell into the water and drowned. In some variations, he died of starvation and thirst from just sitting by the edge of the pool until he gave out, gazing at his reflection until he died. In both versions, the Narcissus plant first sprang from where he died.

The other derivation of the name Narcissus is that the plant is named after its narcotic properties (ναρκάω narkao, “to grow numb” in Greek). All parts of the Daffodil are poisonous, especially the bulb but also the leaves. Sharp crystals of calcium oxalate in the milky sap of the leaves keep animals from eating the plant and cause skin irritation (wear gloves when handling the flowers).

Whatever the name may mean, the sight of daffodils means spring has come and summer is on its way!

Caring for Your Daffodils 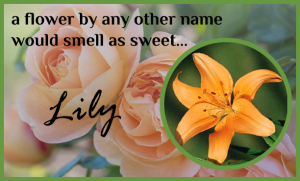 What’s in a Name: Lily